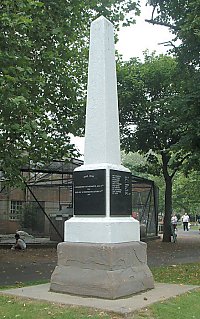 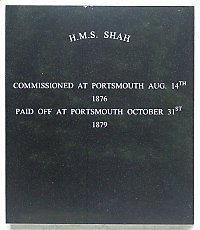 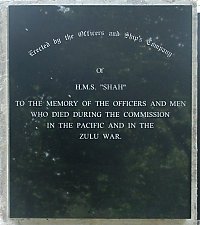 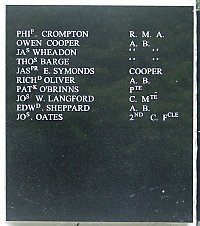 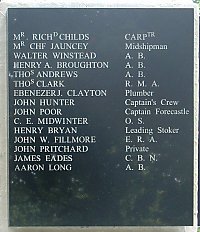 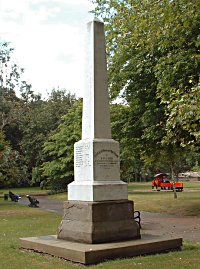 Location
On the main walk through Victoria Park by the pets enclosure. Victoria Park is between the Guildhall Square and the junction of Anglesea Road & Edinburgh Road by the Roman Catholic Cathedral.

Description
The memorial is of marble sitting on a stone plinth; there are four plaques surrounding the middle section. The text was originally set out in lead lettering and and by 2010 so many of the letters were missing it was becoming indecipherable. The City Council decided in 2012 to restore the whole monument but rather than replace the lettering in lead they used four black stone plaques.

Further Information
Despite the severe erosion on the original memorial it was still possible to complete the list of names by cross-checking with an announcement in the Times of 27th March 1880 which gave a full transcription (thanks go to Ian Woodason for supplying the reference). Even more detailed research into the names has been carried out by John Bilcliffe whose results are shown below.

HMS Shah was an unarmoured iron hulled frigate. She fought an inconclusive battle against the Peruvian ironclad HUASCAR, during which the Shah fired the first locomotive torpedo to be used in anger resulting in a miss (it was probably too slow). May 1877 Battle of PACOCHA

She is known to have visited Pitcairn Island in September 1878 at a time when she was the flagship of the British Pacific Fleet.

HMS Shah took Sir Garnet Wolseley to take over from Lord Chelmsford in the Zulu War landing at Durban on 4th July 1879. Some of her crew took part in the Battle of Ginginlovo on 2nd April 1879. She also landed part of the Naval Brigade for the Relief of Eshowe in conjunction with HMS Tenedos and HMS Boadicea.

In 1892 HMS Shah was de-commissioned and in May that year she was towed by HMS Narcissus from Portsmouth to Bermuda. A crew to the Shah was supplied from the “Narcissus” consisting of 1 Lieutenant, 1 Sub-Lieutenant, 2 Warrant Officers, and 100 men.
[Captain Alston’s Seamanship, 1894. p404.]

On arrival in Bermuda the ship was converted for use as a coal barge – a role she continued to perform for over 40 years. In 1934, she was sold and towed to Denmark, but before she left Bermuda a plaque was removed from the ship. This proved to be an autograph of the Shah of Persia (see photo) which was displayed at the local museum. In 1974 Lieut. Commander Ian Stranack (a naval historian who wrote a book on the history of the Dockyard in Bermuda), from HMS Malabar, visited the museum and “discovered” the plaque. He took it back to HMS Malabar where Fleet Chief Petty Officer George Pagett restored it.
[Virginia Olander, St. George’s Historical Society Museum, Bermuda]

And there the history of the ship might have ended, but…..

…..in 2005 we received some interesting correspondence relating to the eventual fate of HMS Shah from Poul Olsen in Denmark. Poul formerly worked at the Graasten Palace and he told us that in a book by a Royal Architect, it is asserted that the ship’s decking was stripped out and subsequently laid down as flooring in three rooms in the palace. One of the dates mentioned for this is 1935, which was the same year that Queen Ingrid and King Frederik IX (parents of the current Queen Margrethe) were married and given use of the palace.

Poul goes on to say “It’s definitely a shipdeck we have in these rooms. There is a special smell, even though its old, it still smells a bit like tar. The floor is probably made of teac(k). Its not a sort of wood we … nor the Germans would have (had) easy access to at this time. Decks on (our) ships would be from more native wood like oak. The Danish fleet was taken by Lord Nelson in 1812, and sailed after that under English flag. The English had even demanded (that we) cut down our oak woods, so we could not have a fleet again.”

And to complete the record, Poul sent us photographs of the floor. We gratefully acknowledge the permission, granted by Her Majesty Queen Margrethe II, to reprint these images. 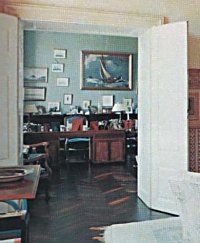 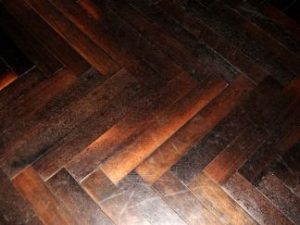 Peter Marshall writes
My Grandfather, James Marshall was a Steward aboard HMS Shah and his obituary in the East Dorset Herald, 26th May 1910 includes further information as follows:-
“…. It was an engagement between Her Majesty’s ship the Shah on which Mr. Marshall was then serving, and the Peruvian ironclad the Huascar. The Shah was the flagship of Rear Admiral de Horsey, and though a new vessel, was of iron, sheathed with wood, a fine ship of the old style, and the Huascar was an ironclad of a much more powerful description. There had been a revolution in Peru, and the Peruvian Navy had rebelled, and the Huascar had gone on a piratical expedition, stopping British mail boats, taking coals and other things out of them. This caused an intervention on the part of the British Government, and the Shah was sent in pursuit of the Huascar. The fight which took place was inconclusive. Although the Huascar was not captured, the Shah had the best of the battle, but her foe got away through getting into shallow waters, being of lighter draft. During the night the Shah sent a boating expedition to clear the Huascar out, but she got way and afterwards surrendered to her own government. As the result of that engagement the Admiralty quickly replaced the Shah with the more powerful ship Triumph, the Shah being ordered home. On her way she called at St. Helena, and there the news was received of the disaster to the ‘noble 24th’ of Isandulana (sic) fame. There was no cable to St. Helena and the Cape in those days, and upon his own responsibility the Captain of the Shah embarked all the available troops on the island, and proceeded with them to Port Elizabeth, from whence the troops and Naval Brigade of 600 strong went to the front, and their timely arrival practically saved the situation, keeping the zulus in check until the military expedition arrived.”

Duncan Mirylees writes
…according to Alan McGowan’s “HMS Victory, her construction, Career and Restoration” (pub by Caxton 1999), the lower masts (of the Shah) are now to be found onboard HMS Victory? When she was being restored, the masts were found languishing in Bermuda having been removed from the Shah when she was being hulked and, being of a suitable size, were used to replace Victory’s decaying timber ones.

The Monument
A report of March 20th 1880 describes the memorial as “an obelisk of white Sicilian marble, standing upon a plinth of the same material, which is supported by two more plinths of blue pennart stone. The whole stands on a York landing, seven feet square, and the letters are worked in imperishable metal”. The report goes on to say that “It was originally planned for Southsea Esplanade, but the War Office declined permission. It cost 100 guineas and was the work of Messrs. Whites of Commercial Road”.

John Bilcliffe’s Research
John writes, “There were errors on the memorial itself and errors in the Times report. … all names/ranks have been checked against the ship’s log (covering it’s three year commission); the South Africa War (Zulu) Medal Roll and from sailors papers where available. The results are … (below). The names are in the order that they appear on the memorial.”