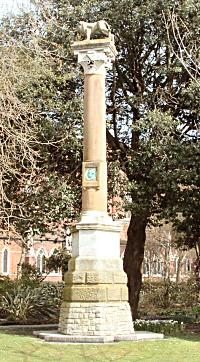 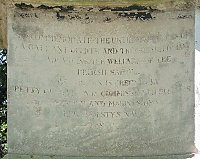 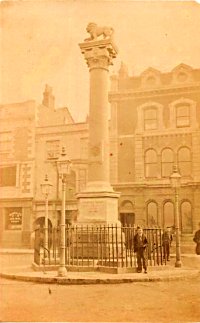 Description
This is a six sided column surmounted by a pillar.

TO COMMEMORATE THE UNTIRING EFFORTS OF
A GALLANT OFFICER AND TRUE-HEARTED MAN
IN ADVANCING THE WELFARE OF THE
BRITISH SAILOR
THIS COLUMN IS ERECTED BY
PETTY OFFICERS, NON-COMMISSIONED OFFICERS
SEAMEN AND MARINES OF
HER MAJESTY’S NAVY
1868

READY AYE READY
Further Information
Admiral Charles Napier was a benefactor in the Horndean area and used to live at Merchistoun Hall, off the London Road. He is buried in the churchyard of All Saints, Catherington.The memorial, which was raised by public subscription, was originally sited at the junction of what are now Commercial Road and Edinburgh Road. In 1878 it was decided that the monument had to be removed to it’s current location in Victoria Park as it was impeding the flow of traffic in the area.Extracts from the Obituary to Sir Charles Napier.We regret to record the death of Vice Admiral Sir Charles Napier, which took place at his residence, Merchistoun Hall, shortly before six o’clock on Tuesday last. Mr. O’Bryne, in his “Naval Biography” says that “Sir Charles Napier was the eldest son of the Hon. Charles Napier, of Merchistoun Hall, County Stirling, and was born on the 6th. March, 1786; entered the Navy on the 1st. November, 1800 as a First Class Volunteer on board the “Martin”, sloop employed in the North Sea. In November, 1802, he became midshipman on board the “Greyhound”, and was made Lieutenant 30th. November 1805 into the “Courageous”. In March, 1807, was nominated out of the “Prince George”, then in the West Indies, to the acting command of the “Pultusk” and confirmed by the Admiral on the 30th. November following.”

“After witnessing the reduction of the Danish Islands, St. Thomas and St. Croix, Captain Napier assisted in the boats of the Faura, sloop, at the cutting out of a Spanish merchant vessel from under the batteries of Puerto Rico. In August, assumed the command of the “Recruit”, and fought a very smart action with, and ultimately put to flight a French corvette, of 22 guns and 140 men. In this action the “Recruit’s” mainmast was shot away, her carronades dismounted, several of her men killed and wounded, and Captain Napier himself had his thigh broken, but refused to leave the deck until the conclusion of the engagement.”

“In February, 1809 assisted in the reduction of Martinique, where he won distinction and with only five men, he landed in open day, scaled the walls, and planted the Union Jack on the ramparts of Fort Edward. In the following April, during Sir Alexander Cochrane’s pursuit of three French ships of the line which terminated in the capture of the 74-gun ship “D’Houlpoult”, he signalled himself by the proximity he kept to the enemy. Captain Napier returned to England in the ‘Jason'”.

“He afterwards served as a volunteer with the army in Portugal, was present at the battle of Busaco, and was wounded. In 1811 commissioned to the “Thames”. On November 1st. in command of his own ship’s boats and three of those of the “Imperieuse”, Captain Napier landed with 250 men of the 62nd. Regiment, under Major Daily, at the back of the harbour of Palinuro, where he carried the heights in gallant style under a heavy fire from the enemy, who were in large force, and who attempted to retire.”

“On the l4th. May, 1812, attacked the port of Sapri, and enforced the surrender of a strong battery and tower. In 1813, Captain Napier, in a most masterly manner and without loss, took possession of the island of Ponza, notwithstanding that in the attempt he was exposed to the fire of four batteries and a tower. Next joined the “Euryalus”, and captured with her boats the “La Fortune” together with upwards of 20 merchant vessels lying in Cavalaie Roads. He took part in the brilliant expedition against Alexandria, and rendered such efficient service that Captain J. Gordon, the conducting officer declared in his dispatches ‘that he owed him more obligations than he had words to express.'”

In June 1815, the “Euryalus”, the ship Captain Napier then commanded, was paid off, and her captain was nominated a C.B. From January, 1829 until the early part of 1832, he was employed in the “Galatea” on particular service.

In 1833, Sir Charles succeeded Admiral Sarorius in the command of Dom Pedro’s fleet and gained a signal victory over the more numerous and powerful fleet of Dom Miguel, off Cape St. Vincent, for which he was rewarded with the title of Cape St. Vincent, and with the Order of the Tower and Sword.

On the 1st. of January, 1839, he was appointed to the command of the “Powerful”, on board which vessel he hoisted his Commodore’s pennant as second in command under Admiral Houble.

On the 10th. of September following he effected a landing at D’Journie with 1,500 Turks and Marines. In the same month he defeated a body of the enemy at Kelbson; and afterwards bombarded and stormed the strong town of Sidon. After co-operating in the memorable attack upon Jean D’Acre, he proceeded to take charge of the squadron off Alexandria, where he landed and concluded a convention with Mehemet All, which brought the war to a conclusion.

In acknowlegement of his distinguished services during the campaign Sir Charles was created a K.C.B. on the 4th. of tecember, 1840, and was also included in the vote of thanks by the Houses of Parliament. He was also presented by the Emperors of Russia and Austria and the King of Prussia with the Orders of St. George of Russia; Maria Therea of Austria; and the Red Eagle of Prussia. In November, 1841, he was appointed Naval Aide-de-Campe to Her Majesty. The Captain’s Good Service Pension had been awarded to him in 1837.

Sir Charles Napier married the widow of Edward (Elers), Esq. R.N. whose son perished while in command of the “Avenger”, steam frigate, when she was wrecked on the Sorello Pocks in the Mediterranean. Sir Charles had only one child, a daughter.