People and the park

When the park was first planned in the 1870s, it was known as the ‘People’s Park’. However, as the park’s opening coincided with the Queen’s birthday it was renamed in her honour and became Victoria Park.

We will deliver a programme of activities that excite and educate visitors, supported by an ‘interpretation plan’ which will use modern and traditional methods to tell the stories of the objects, animals, landscape and social history of the People’s Park.

Approximately 500,000 use the park each year. We aim to increase this by 100,000 visitors through a range of events, activities, improved infrastructure, volunteering and learning opportunities while continuing to provide a calm and peaceful place for everyone to enjoy the park’s natural environment.

We want to improve the facilities within the park so that more people have access to the park, feel safe here and are able to use it all year round. Popular ideas include:

We know that many people would like the historic monuments within the park to be well maintained and for their history and significance to be explained. An interpretation plan will help us tell the story of the park using modern and traditional methods.

We want to encourage more people to use the park, especially groups that haven’t traditionally visited. We’ve been speaking to hundreds of local residents and community groups about what type of events and activities would bring them to the park.

Local priorities based on consultation are:

Open space in our crowded city is so valuable and we want Victoria Park to be a place where people can boost their physical and mental health and wellbeing. Many individuals and groups already use the park in this way but we want to encourage more of this by: 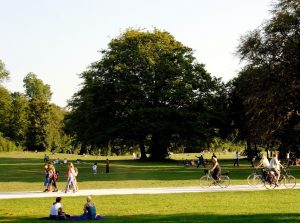 Nature is good for your health!

Research shows that being in green open spaces make us happier, healthier, more productive
and nicer!